Types of rock in the Alps

There are a vast number of rock types in the Alps. Some, such as limestone or prehistoric rock in the form of gneiss or granite, play a key role for climbers. These rock types are crucial in determining the shape of the mountain, the grip and the protection, as well as the strength and breakage behavior. This therefore defines the type of climbing.

Let’s take a look at the geology of our native rock.

Types of rock in the Alps Limestone Granite Gneiss

TYPES OF ROCK IN THE ALPES

The rock types that are relevant to climbers in the Alps are limestone, slate, granite and gneiss. Alpine climbing rocks differ in quality, weathering, shape and breakage behavior. The rock type is therefore a fundamental factor for every climber and also relevant to safety. 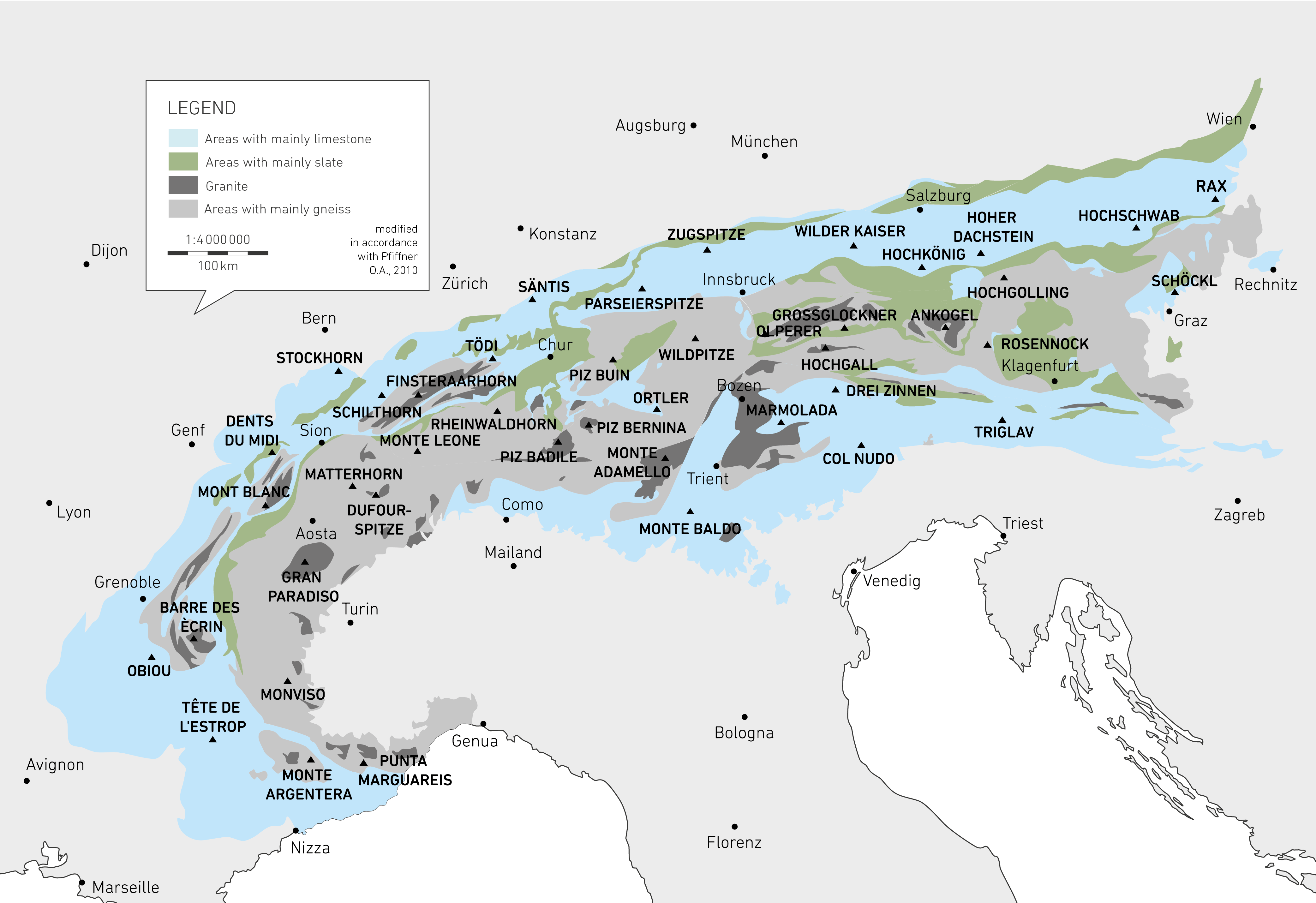 Widespread in the Eastern Alps, this rock type was formed by the solidified deposits of animals and plants as well as shells on the seabed. Unlike granite and gneiss, limestone and dolomite were formed on the surface of the earth. Due to the variety of underwater landscapes and creatures, different types of limestone dominate in the Alps.

Whilst slanted, folded or broken rock is often found in the Northern Limestone Alps (such as Wetterstein), a horizontal deposit characterized by bulky formations with strips you can walk on is dominant further south in the Dolomites. On the western side of the Alps is the Helvetic zone, with intensively folded limestone layers.

BREAK BEHAVIOR: Limestone is full of numerous small cracks where breakage can occur. It is characterized by fine scree below the rock faces.

PROTECTION: Natural securing points such as tunnels and rocky knolls can often be found in limestone. Nuts can also usually be positioned well in limestone. Frequently limestone is protected by fixed gear called bolts due to the breakage behavior of the rock.

Granite is a deep rock formed by the hardening of magma and released by erosion. As granite magma is extremely viscous and usually gets stuck in the earth’s crust, it can form a weird volume or massive forms with extreme depth such as the Mont Blanc massif. Many mountain groups in the Alps are made of granite: from the Dauphiné to Mont-Blanc granite to the Grossvenediger in the Eastern Alps. The Central Alps are characterized by clefts and horizontal bands as well as vertical and horizontal cracks.

BREAKING BEHAVIOR: Granite is characterized by relief gaps running horizontally as well as parallel to the slope, which can lead to huge granite breakages in the event of instability, for example as a result of thawing permafrost.

PROTECTION: Parallel cracks are characteristic in prehistoric rock such as granite or gneiss. In addition to passive protection such as wedges or nuts, camming devices (Camalots) are mainly used for active protection, as each one can cover a range of crack sizes ensuring the perfect fit.

BORN OUT OF DIVERSITY: GNEISS

Gneiss is a metamorphic rock that has resulted from other rocks under high temperatures and high-pressure conditions. Gneiss therefore includes a huge variety of different metamorphic rock types, which are partially still visible. Gneiss is characterized by “foliation planes” – a kind of layered structure. Most of the gneiss in the Alps is former granite that has warped and recrystallized during the formation of the Alps. Climbing on gneiss is therefore often similar to climbing on granite.

BREAKING BEHAVIOR: Due to the varied composition of gneiss, the strength ranges from very good to extremely brittle.

PROTECTION: Parallel cracks are characteristic in prehistoric rock such as granite or gneiss. In addition to passive protection such as wedges or nuts, camming devices (Camalots) are mainly used for active protection, as each one can cover a range of crack sizes ensuring the perfect fit. 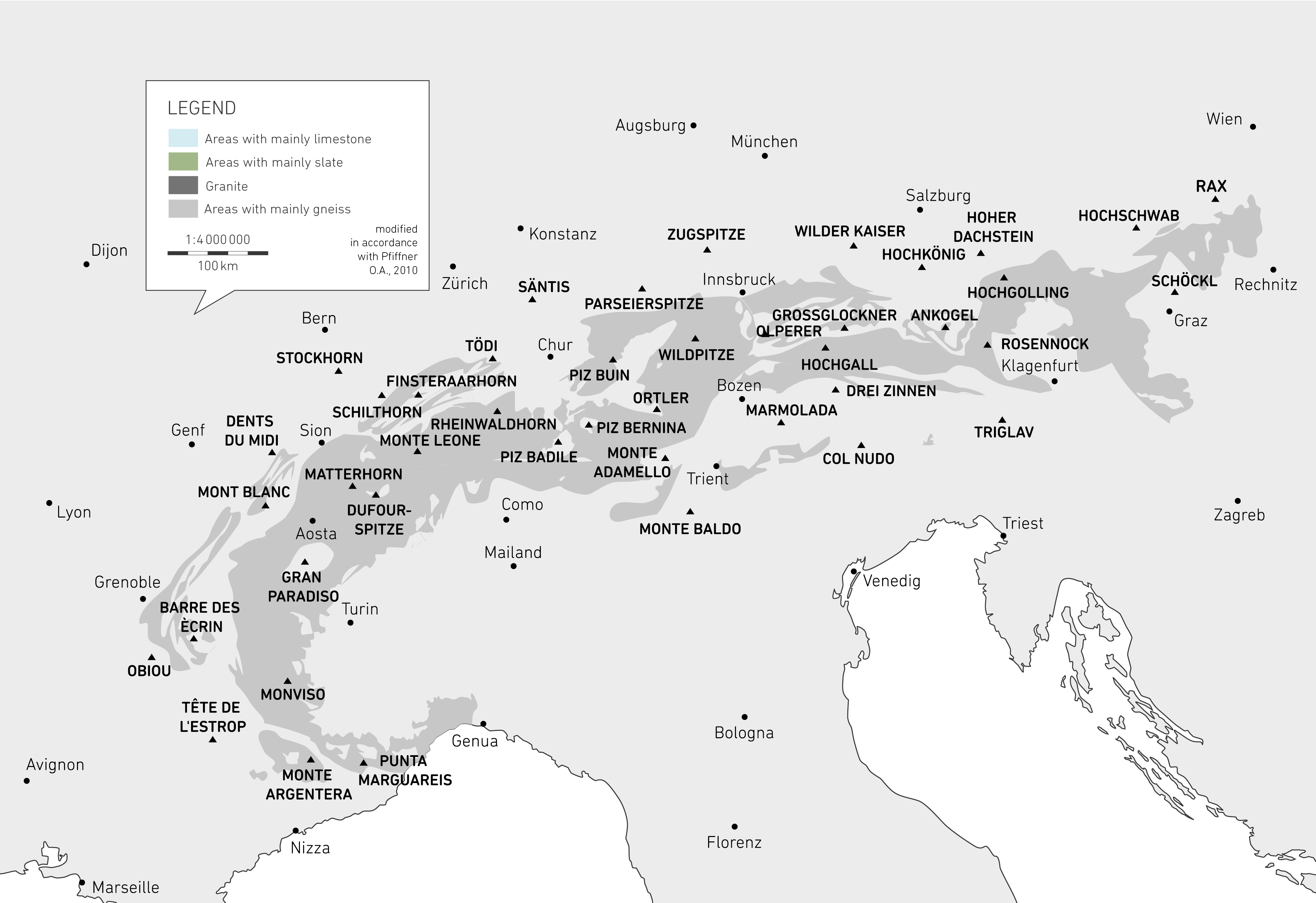