Belaying to multiple questionable or mobile anchors: Distribution of load

The anchor is the “safe haven” for a rope team. It should hold during any potential fall – whether it’s the lead climber or the follower. It therefore plays a central role in alpine climbing.

At first glance, anchor building appears quite complex: the climber must use different systems depending upon the quality of the anchor and the belay method. The climber typically chooses between either a series connection or a distribution of load. In other regions, different anchors such as the South Tyrolean method are widespread. The reasons for these different systems are the various circumstances, such as the number and quality of anchors, the pulling direction, the position in relation to each other as well as the belay methods.

Irrespective of the system that is used, every anchor has a central point where the personal anchor and the partner’s belay meet. It is important that this is properly and clearly arranged so that the climber can work quickly and effectively.

If you understand the rules, you can build anchors safely, quickly and clearly!

When do I use what?

Essentially, there are two types of anchors: a series connection or a distribution of load. The classic series connection is used for solid anchors. Here one anchor (bolt) is put under strain, while the second, unburdened anchor serves as a redundancy. This means that there is a backup for the first anchor if the first one should break. The series connection can be set up with a climbing robe or a pre-prepared belay sling with a bowline on a bight (double bight). This system is for use exclusively with good anchors.

A distribution of load is used for questionable anchors, such as normal pitons or traditional climbing equipment. In this scenario a single anchor should not solely be put under strain, and instead the acting forces should be distributed across all anchors. If an anchor breaks, the others take the strain without jolting.

NOTE: Always set up a distribution of load with questionable anchors! 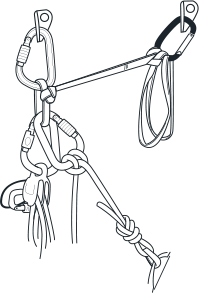 Belaying to a solid anchor

If an anchor has sufficient sturdiness in all directions, a belay can be set up at that point. In addition to standard bolts, a belay with only one anchor can be set up on a rocky knoll, a block, an arm-thick tunnel or a thick tree.

If there is a risk of the anchor failing as a result of an upward shift (e.g. in the case of a rocky knoll belay), the anchor must be braced. If this is not possible, in exceptional circumstances it is to be braced with the belayer’s bodyweight. In this case, the belay is set up at the anchor using the body and a dummy runner. The dummy runner will prevent a falling individual from falling onto the belayer: It provides protection that – in the event of a belay fall – ensures that the fall tension in the belay device will act upwards and the belayer can stop the fall. 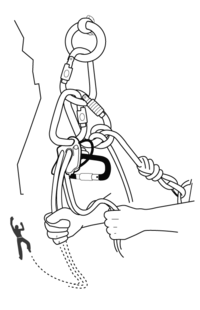 If there is the option of creating a redundancy without much effort, then always set up a classic series connection!

Belay on a tree
Trees can be used as a belay. Here a sling is wrapped around a tree with a girth hitch so that it cannot move upwards. A belay tree should still be green, meaning it has not died and is not rotten. The diameter of the tree should be at least as thick as a leg. 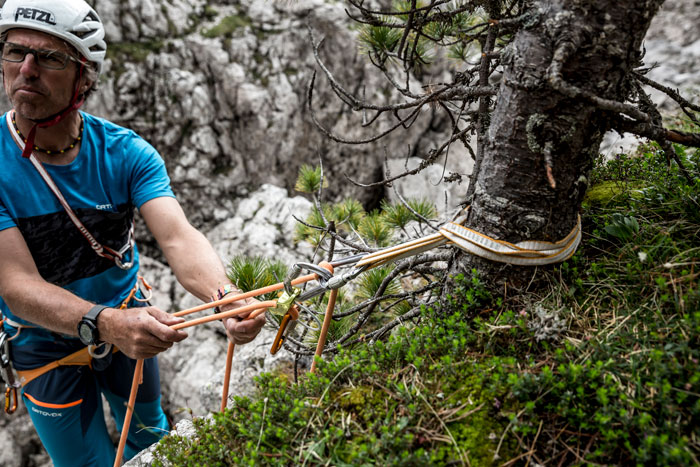 Tunnel belay
To be able to make a tunnel belay, the tunnel should be at least as thick as an arm at its weakest point and should not have any cracks. Here the climber threads a sling through the tunnel. A girth hitch is not used, as this would automatically move to the narrowest, and therefore least sturdy, point of the tunnel. Instead the climber threads a sling around the outcrop so that the load is applied to its base – the most solid point of the tunnel. 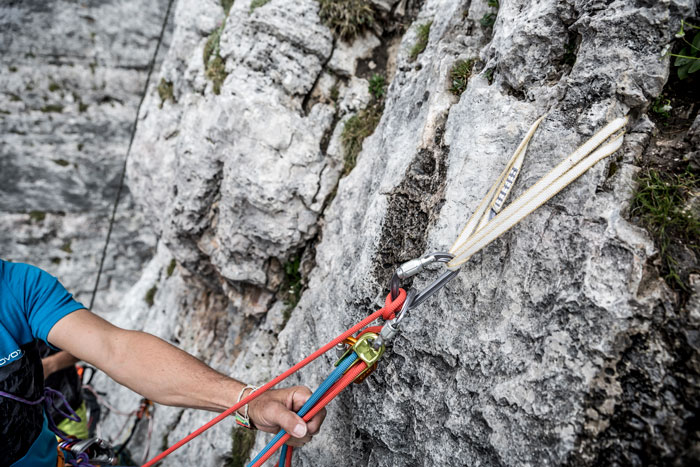 Belay on a rocky knoll
In alpine terrain, rocky knolls are often used for belaying. Beware: If the sling can be lifted upwards or sideways in the event that the lead climber falls, the central point must be braced. If this is not possible, it must be braced with the belayer’s bodyweight and a dummy runner used.

If you are climbing on a route where belays are set up with two solid bolts each, a series connection is to be used. If the climbers alternate who takes the lead, the belay can also be set up with a climbing rope instead of a belay sling: To do so, the climber should hook a carabiner onto both anchors, fasten him/herself with a clove hitch to the lower anchor – which also serves as the central point – and then use another clove hitch to attach the rope to the second carabiner. 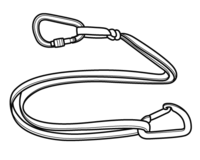 The sling’s bowline serves as the central point at the lower anchor. This is where the climber protects him or herself. Next, the upper anchor is shifted to and the sling is shortened accordingly with an over hand knot or clove hitch.

Belaying to one solid (bolt) and removable/gear anchor

A series connection can also be applied at two anchors of unequal quality if one solid anchor is available. Along with the solid anchor, normal pitons, nuts or camming devices can be used for the second anchor.
The series connection can be set up either with a rope (if the climbers alternate who takes the lead) or with a belay sling. Here it is important that the central point is always positioned at the lower of the two anchors – regardless of the quality.

If you are unsure about the quality of the “solid” anchor, you should use a distribution of load!

If there are two removable points or only two questionable anchors, the anchor should be improved. If that isn’t possible and no other anchor is available, the climber must then set up a distribution of load. The force is distributed across both anchors in the belay. In the event of a fall, the force is distributed as equally as possible across both anchors and if an anchor breaks there will be no additional force added to the system.

For two gear or questionable anchors (e.g. normal pitons), the climber clips a sufficiently long sling onto the upper and lower anchor for the distribution of load. Then he/she clips on a central point carabiner using a clove hitch or a girth hitch knot. 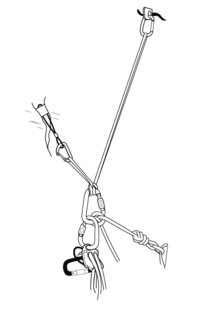 The climber does not use any carabiners at the anchors when setting up a South Tyrolean anchor. Instead, the anchor is set up using a sewn sling or an open Kevlar or Dyneema cord, so that the climber can connect it quickly and easily to multiple anchors. To avoid time-intensive tying and untying of knots, the central point carabiner is attached to the sling using a girth hitch knot.

If an open Kevlar or Dyneema cord is used, this is tied with a simple over hand knot after threading.

For a belay with several questionable anchors, such as on normal pitons, nuts or camming devices, the load must be distributed. All anchors are to be connected to each other with a long Dyneema or Kevlar cord (5.5mm, 6–7m) or a long, sewn Dyneema sling (2.5m). Open Kevlar or Dyneema cords are tied with an over hand knot. The central point is then attached to a locking carabiner with a girth hitch knot.

The anchor is the safe haven for a rope team. As the central protection point in the climb, it must be able to withstand the lead or follower falling. It is therefore extremely important that all alpine climbers can quickly and securely set up a clear anchor. This depends upon the current conditions, such as the number and quality of anchors, their position in relation to one another and the belay method.

NOW IT'S YOUR TURN!

As the lead climber, you need to set up an anchor. On the rock face you find two good bolts. How do you build an anchor?

Drag and drop the processes to form the proper sequence!

Unfortunately, this is the wrong order! Try it again!

You have solved the quiz correctly.

Read more on this topic 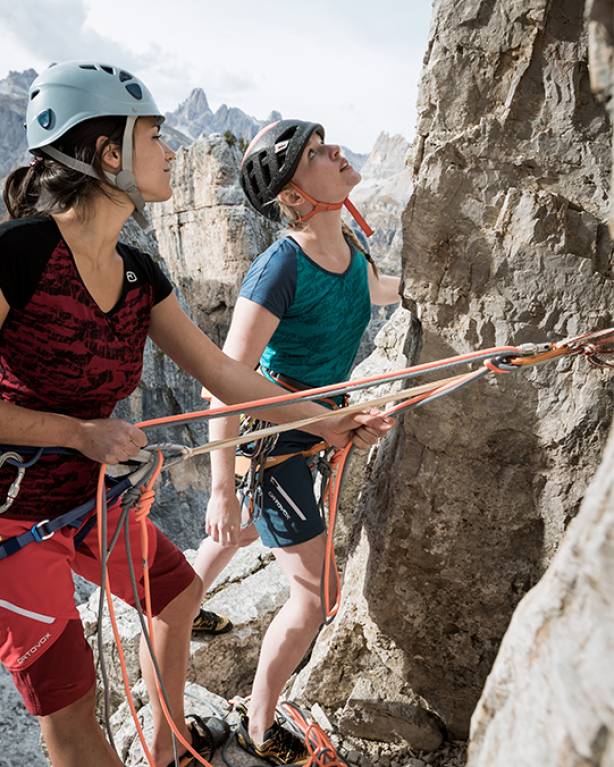 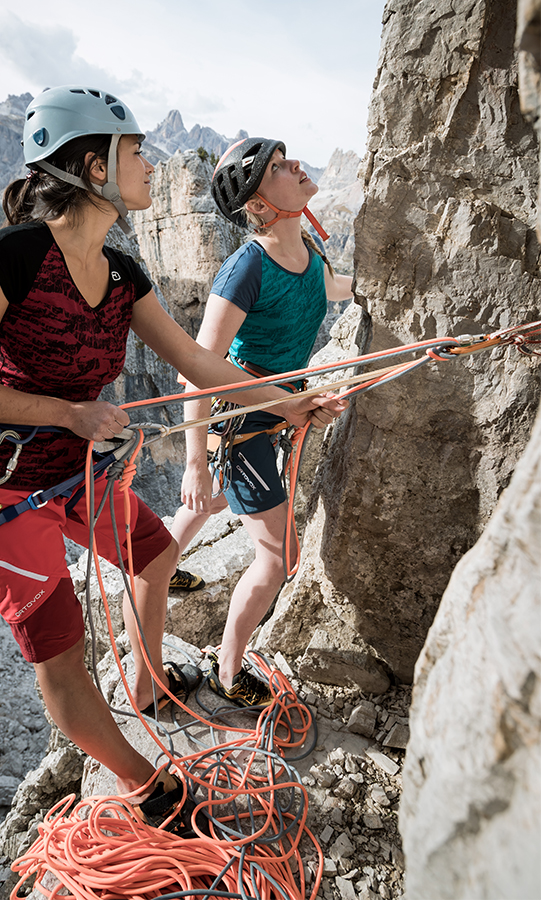 When climbing, the rope team literally has their climbing partner’s life in their hands. Mastering the partner's belay in every situation is therefore of extraordinary importance.

In alpine terrain, we differentiate between three different belay methods:

The climber must have experience of body belays before using them, and the difference in weight between the climbers must not be too great. A dummy runner must also be clipped onto the belay. The dummy runner will prevent a falling individual from falling onto the belayer: It provides protection that – in the event of a belay fall – ensures that the fall tension in the belay device will act upwards and the belayer can stop the fall.

Dynamic or semi-automatic devices can be used as protecting devices. Body belaying is recommended if the following points are guaranteed:

In an anchor belay, the belay device is hooked into the center of the anchor. The central point can be a locked carabiner, a bowline on a bight or even a quick link on the anchor bolt. A dynamic device (HMS/ATC) must be used as a belay device.

An anchor belay requires a solid anchor, as fall tension can be exerted on the anchor in any direction. The advantage of this belay is that the climber is not part of the belay chain and therefore no forces are exerted upon him/her. If an anchor belay is used, in the event of a fall the braking distance is shorter and therefore the total fall distance is shortest. The disadvantage is that, because of the shorter braking distance, the impact of the falling climber against the rock face can be harder.

CENTRAL POINT BELAY IN A DISTRIBUTION OF LOAD

In a central point belay in a distribution of load, the belay is at a point between the anchor and body. It is used if there are no reliable anchors available at the belay (no bolts), or if the climber is working with removable traditional climbing gear for anchors. In this case, two to five anchors are to be connected in such a way that all of them can absorb the fall energy to the central point at the same time. If one of the anchors gives, there is no additional force added to the system (jerking). The ideal way of setting up such belays is with the “South Tyrolean method”. This involves using a locking carabiner with a girth hitch as the central point, thus avoiding a tangle.

The choice of belay method is always situation dependent!

Video
Belay methods: belay at a central point for distribution of load
Partner

ORTOVOX uses cookies in order to best adapt this website to our users’ needs. If you continue to browse the site, you are agreeing to the use of cookies.